Finishing Off Your Ivy Gimlet ... 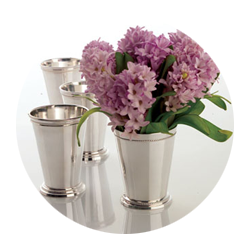 Our first Bungalust ever was on the Ivy Gimlet. This was a few months ago, before there was site, when Bungalux was only a newsletter going to a tiny little list of friends and family (we’re growing wistful).

Well, last night we were crawling the internet for coolest of the coolest in home design and real estate to recommend to you – we do it so you can spend your Saturday nights doing things way more exciting – and we found the perfect cups to keep your Ivy Gimlet cool.

They’re at Zhush.com, a site definitely worth spying on, because they had quite a few odds-and-ends we thought were pretty darn cool. Among some of our other favorite items on the Zhush site are the Glass Piggy Bank (teach your future investment bankers young!), the Yak Horn on Wood Base, the Nautical Knot Door Stopper, and the Agate Trinket Box. Many items on the site retail for under $100, so for those of you who have been complaining that Bungalux is only for rich people (our counterargument, we’re not rich, and we read it), many of the items on the site can make a dull room a Bungalux inexpensively.

And, even better, when we emailed Zhush to tell them how much we adored them, they gave us a code for our readers to get 10% off all the products on the site – fabulous mint julep glasses included. The code’s zhushx2, so you can put it in when you’re checking-out.

And for those of you who may not have been Bungalux “early adopters,” pop over to our fantastic post on the Ivy Gimlet – still one of our favorites, even months later – and start juleping, beautiful drinkware now included.