Who Needs a Boyfriend When You Have a Bungalux? 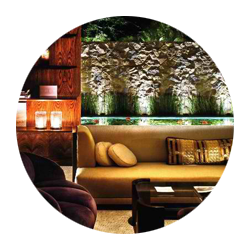 There are some lessons here. Number one: If your sig other wants to go shoot a movie with Angelina Jolie try to talk him out of it. Number two: Never date anyone Taylor Swift wrote a song about.

And number three: If you’re going to nurse a series of broken hearts, best to do it in a Bungalux.

Jen’s taking our advice. Post-divorce, Jen purchased a Hal Levitt-designed sprawling house in the Trousdale area of Beverly Hills for $13 million. She worked with AD 100 designer Stephen Shadley to make it into the ultimate single girl’s pad and then abruptly listed it a few months ago for $42 million. It’s still on the market, so any Bungalux readers whose Wall Street bonuses are burning a hole in their pockets can drop us a note at realestate@bungalux.com and we’ll show it to you.

So, why did Jen list LA? Well, the rumor was that she preferred her smaller, more intimate LA Bungalux to her sprawling 10,000 square foot new one. And now we know that our fave Friend may be spending more time in NYC. She ponied up close to $8 million to buy two apartments on West 12th in the West Village and plans to combine them into a duplex. The new apartment will have over 2,700 square feet of living space and 900 square feet of terrace, allowing Jen 360-degree views and ample room for nice guys and babies. Let’s face it, any guy would be lucky to be the one to nest with Jennifer Aniston.

And to Jen and the rest of you who have the luxury of large terraces, we just read the newly released Rooftop Gardens: The Terraces, Conservatories, and Balconies of New York which made us drool, gave us great inspiration, and got us thinking about scooping up our own swanky New York pad to garden-up.

Then, after we do that, we’ll take our own advice and move on to nice guys. Well... maybe.