Who Invented the Tweet and Where Do They Live? 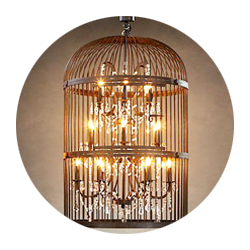 No, folks, we're not talking about Ashton Kutcher. Long before there was Twitter there were the original inventors of the tweet. Birds. Remember those guys? Descended from the dinosaurs, not from Silicon Valley?

Okay, so having a pet bird equals a lot of cleanup but he brings with him the opportunity to buy one of those miniature pieces of art called the birdcage.

More space-efficient than the doghouse and prettier than the gerbil cage, the birdcage can be used for actual birds or, for most of us, as a great form of decoration. The birdcage was invented over two centuries ago; they're made from materials ranging from iron to stainless steel and in styles from Japanese to modern, so whatever your room’s décor you can find one that works. We love mixing an old birdcage in the modern house and vice-versa.

For the expensive, ornate, antique version we like North Fork Pets. And Restoration Hardware just came out with a gorgeous birdcage chandelier that we're lusting over. You can also find a cheaper birdcage for your real bird (or bunny!) in local nurseries. In Los Angeles we like Rolling Greens, but we're sure you can find an alternative in almost any city.

Oh, and we promise that when your bird finds his new gorgeous home he’ll get his tweet back.