Stress Getting to You? Grab a Beer. 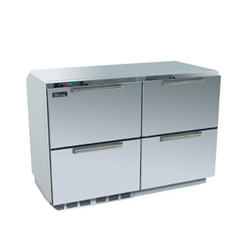 If you're anything like us, you grew up in the '80s. Friday nights of your formative years were spent watching that one-two Dallas and Falcon Crest punch, drooling over Lorenzo Lamas, Charlene Tilton or ... JR's bar in his office?

Yeah, you remember. Once three o'clock or so rolled around, it was scotch time for JR. You envisioned someday working in an environment where you could have your own office bar and pluck a scotch whenever your stalker ex showed up or when the stock market tanked.

Here we are, years later. You finally got your own corner office (or cubicle, if you're one of our readers who work in a tech firm with "open communication"). So, the first day in your new digs you pulled out a glass of scotch and ... hated it?

Don't fret. The refrigerated drawer to the rescue.

Perfect for microbrews, veggies, soft drinks, and bottled water, the refrigerator drawers fit under a kitchen counter or any other shelving and can be covered in the same cabinetry as their surroundings (though we think they look pretty cool au natural as well). They're also perfect for that outdoor bar in your beach house.

Perlick and Sub-Zero make our favorites, but others make them too. You're going to shell out thousands of dollars for these designer drawers, but we think they're worth every penny.

So the next time the market plummets three hundred or that Lindsay Lohan vehicle you financed goes into turnaround again (you should have known better) reach for your Blue Moon. Oh, and if you're more of a vodka person, we suggest you opt for freezer drawers. Either way, you'll stop cursing Lindsay in no time flat.