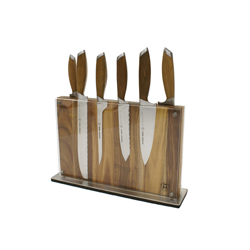 We’ve had a recent obsession with knives.

No, there’s nothing weird, suicidal, or kinky about it. It may be because we just finished reading The Hunger Games trilogy – a must read for all you fiction readers – or perhaps it’s that “little” kitchen renovation we’re embarking on.

Whatever the reason, just as our knife fetish was at its sharpest, we got an email from one of our friends in New York pointing out his favorite “no one knows about it yet, but everyone will” cutlery, knife blocks, and butcher blocks.

We clicked over to the link, ordered a plethora of products for our kitchen, and … Well, let’s just say now we’re even more knife-obsessed.

It’s impossible for us to choose favorites, but a few of Schimdt Brothers’ stick-out products include the 4-in-1 cutting board, which functions as butcher block, cutting board, and trivet; the Downtown Block; and the Giotto Block. For those of you looking for a full knife set, you may want to start off with the Schmidt Brothers Bonded Teak Series 7 Piece Downtown Block Starter Set. Get the cool knife set, and we’re certain the Tribeca loft and hot supermodel will then magically appear to go with it.

And, yes, knives are supposedly bad luck to give as gifts (something about “cutting” friendships), but we love the idea of giving one of the cutting boards as a housewarming, engagement, or wedding gift.