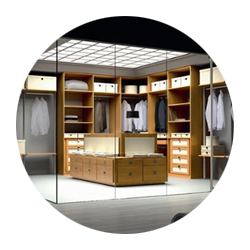 We cook for ourselves. We don’t have personal chefs or live-in housekeepers. We’ve been known to buy our own flowers in advance of a date and clean our own champagne glasses after one. We don’t sit in the back of chauffeured BMW 7 Series; instead, we drive our own sports cars. We wish we had Rachel Zoe on staff, but we don’t. We’ve been known to decorate, answer our own phones, toot our own horns, type our own letters.

Our point: We grew up the X, Y, and Z Gens, so we’re pretty darn self-sufficient.

All that being said, one thing we don’t do because we’re so bad at it is move. Which is how we were referred to Andrea Rapke, Founder of The Organized Move.

To call Andrea amazing at anything having to do with, well, the organized move, is like calling the Pope a practicing Catholic … both are true but don’t quite tell the story.

Andrea helps her fussy, perfectionist clientele with everything from organizing the perfect closets and kitchens to those tricky moves from Paris to New York which involve photo inventories, multiple climate-controlled storage facilities, and dealing with those co-op and Prewar building boards who don’t want you to move in once they were so fussy about accepting you. The Organized Move does everything: They’ll connect your DirecTV, put your Louboutins and Zegna in colored order, make sure your Warhol collection is housed in 68 degree storage, and make you throw out that 1998 Bon Jovi concert T you promised yourself you’d wear again… when Bon Jovi gets cool.

The Organized Move has offices in Los Angeles and Greenwich, Connecticut, but they’ll fly to meet anyone who needs their services. And, we’ll admit, we all do.

By the way, a few other things: First, Andrea has generously agreed to give Bungalux members a 20% discount on all closet organizing services, so click over to her site and take advantage of it (Andrea never goes on sale). Secondly, Andrea has given us a few invaluable tips for spiffing up our closets for Fall, so check out her Ten List. Finally, as an aside, our friend from New York just used The Organized Move to help him tidy up his Beverly Hills pad and his closet looks like Mickey Rourke’s from 9 ½ Weeks.

Ten Ways to Lux-Up Your Closet