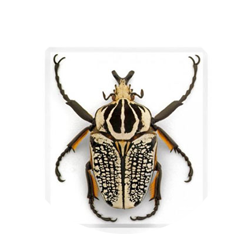 “What’s a pheromone?” you’re asking. We didn’t know the answer to that either, so we Wikied it and got, “Pheromones are chemicals capable of acting outside the body of the secreting individual to impact the behavior of the receiving individual.”

We translated that to human language and think it means that what really makes you attracted to that guy across the street isn’t his 6’4” rocket body, his deadly smile, those blue blue eyes, his quick wit, or his Aston Martin, but his smell?

While we ponder this conundrum, we’re going to recommend you take a look at the art that piqued our interest. Oregon-based designer and artist Christopher Marley works with organisms such as butterflies, beetles, sea urchins, shells, and fossils and displays them wonderfully in death. Sound macabre? It’s not. It makes us realize the uniqueness and beauty in all creatures, even those we occasionally stepped on or were scared of as kids.

We prefer the more natural looking ones, and many retail for around $300-400. We think it’s one of the best pieces of art for the money. A few of our favorites include the giant comet moth, the butterflies (alone or in groupings), the beetle, and the sea urchins. We were given a butterfly as a present and it’s one of our favorite gifts ever. Our only regret is that we don’t have more to cluster together. You can buy them at OK, one of our favorite little stores in LA. We’ll point you to the website so you can take a look.

Now back to the pheromone issue. Could it really be his smell? Nah.