Let Her See the Aston, Let the Rest Surprise Her

The Aston Martin Virage is Headed Your Way 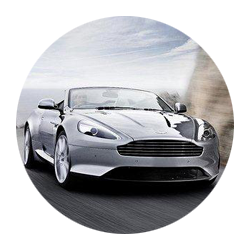 Okay, we’re the first to admit it. We at Bungalux are a bit shallow. But so are you, or you wouldn't be reading this.

So we're allowed to say that what car a guy drives is kind of important. Not because it shows how much money he has, but because a car is a key indicator of his taste.

Let's go over vitals. Speed is critical, but there's a fine line between speed and cheesy speed. For example, that yellow Lamborghini? Not so cool. Too flashy is trying too hard. So is too sporty. So are bad custom wheels, too much chrome, and too much bass.

Confused yet? Need a nav system to figure this whole thing out?

That's why we’re here to help. Our favorite new car for any guy with a driver's license and a fat paycheck is the Aston Martin Virage.

Available this month, the Virage sits between the DBS and DB9 in Aston's impressive line-up. For car neophytes, that means it's the right combo of sportiness, luxury, and elegance. We think Aston has one of the best designs around. In fact, we heard that Jonny Ives, Apple's chief design guy, was driving an Aston for a while, and who are we to argue with the guy who invented white?

Back to the Aston. Please, guys, don't get cute and get it in burgundy or green. We like black. Really.

So, is there a downside to this black gem? At $212,000 for the coupe and $227,000 for the convertible, it is a bit on the expensive side. And it's a little capsule-like and tall guys may have a hard time squeezing in. But once you're in imagine what can happen in there or, at very least, what can happen after you pull in your garage. We promise you’ll be able to go to zero to sixty in… well, let's just say very quickly.