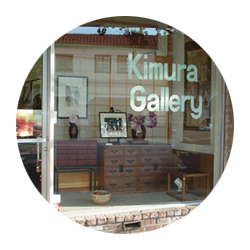 We’re not snobby. Really. But here’s what happened:

We went over to a friend’s house last week. After bestowing compliments on Bungalux, he pointed out that he had heeded our advice a few weeks back and “un-whitened his walls.”

He pointed to a Goonies poster, proudly explaining that based on our recommendation he had framed the movie poster and hung it over his sofa.

Guys, here’s the deal: Framed Goonies posters are not art, and do not belong in grown-up boys’ apartments. And, yes, this goes for The Hangover, The Lord of the Rings trilogy, and Meet the Parents as well. We like Owen Wilson as much as the next guy, but he belongs on screen, not on the wall.

Taking responsibility, we decided we need to start offering some great “go-to’s” for nice inexpensive art. Right off the bat we’re going to give you one of our favorite little hideaways for Japanese woodblock prints: Kimura Gallery. The family-owned business in San Francisco and Palo Alto (we frequent the little gem on Hamilton in Palo Alto) is the perfect place to find inexpensive (most are $75-$250) Japanese woodblock prints. They have a fantastic selection of Ukiyo-e, Sosaku Hanga, Shin Hana, and contemporary prints … and the most perfect little bunch of little insect prints that our founder is currently drooling over because she wants to cluster them in her hallway.

Incidentally, as an interesting conclusion to our story:

We went back to the Goonies guy’s house last night, and the poster had been replaced with a tasteful black-and-white photograph. We complimented him on the improvement, he thanked us, and then he and his friends ignored us in favor of a Japanese video game.

We were ready to talk about how non-Bungalux playing video games with guests over was, when Bungalux's founder popped in. Her eyes lit up when she saw the screen, and she said, “Okay, guys, move over. I absolutely kick ass at SoulCalibur."

We looked at each other in awe as she “kicked ass” for the next four hours, reminding us that what makes a Bungalux is clearly in the eye of the beholder. So, feel free take all of our missives with a grain of salt. (But, remember, if you do, we strongly recommend sea salt.)