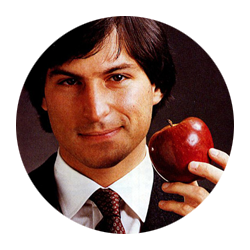 My parents always wanted me to be one, but I am not a journalist. Therefore, I tend to avoid topics that reporters at The New York Times, Wall Street Journal, and other legitimate publications can cover more eloquently and journalistically than I can.

So I had decided I wouldn’t cover the passing of Steve Jobs.

Yet when I sat down to edit today’s article on bedding there was something that seemed so frivolous about it, as if I was avoiding the pink elephant in the room and focusing solely on the black ant in the corner. Could it have been because I’m writing this on a MacBook Pro while listening to my “October Playlist” on my iPod and red-buttoning an unwanted call on my iPhone? Or could it be that we’re a design site – in focus and, well, design – and we can’t simply ignore the passing of one of the great designers of our generation?

Maybe, but it wasn’t that.

I had to cover it because for me, like many entrepreneurs, Steve Jobs was my hero. So, here’s my shot at good-bye:

Steve, you weren’t my hero because you invented the iPhone (though one of my sweetest memories in recent years was lying on the floor with a guy going through his iPhone playlist and plucking out our five “desert island songs”… we probably all have sweet memories like that related to your Apple products). You’re not my hero because your computer looks great on my desk or because your inventions make our website so beautiful.

All those things are certainly nice but, to be honest with you (and you may not want to hear this), you were my hero because of how you failed.

In fact, Steve, you failed not once, not twice, but many times. You failed not only privately, but in the public eye; you failed as an inventor, you failed as an executive. You were run out of the company you cofounded, you bet the house on NeXT which kinda-kinda-not lived up to your expectations. You created the Cube and Lisa, which weren't successes. Although it's a darling now, Apple had its fair share of setbacks and failures too. It wasn't always the Apple we know today.

Yet, despite that, you always bounced back, and you did it gracefully, with aplomb, and a hell of a lot of showmanship. While some people would have been embarrassed to hop back on the stage, you reveled in it. You learned to manage people better, you studied your consumer more intensely, you created Pixar, you destroyed the album as we knew it, you changed the way we communicate. You opened yourself up to learning from the people around you, something so many young company-creators forgot to learn. Most remarkably, you were diagnosed with the killer pancreatic cancer, and your most brilliant work was yet to come.

And what do the rest of us do when we fail? The first time we complain, the second time we feel sorry for ourselves, the third time we draw the blinds and watch reality TV on Bravo for three days straight, and then we give up. We decide it’s easier to get married to the wrong person as opposed to go it alone, we go back to 9-to-5 corporate America instead of working by ourselves twenty hours a day in a crappy shared office space in Palo Alto on an idea that may or may not fly, we settle into a life of complacency. Eventually we forget about our failures, which is always easier than facing them, admitting to them and owning them.

As an entrepreneur and a risk-taker, I fail in little ways and big every single day of my life. I have friends who don’t work, friends who work in a low-stress weekly-paycheck job, friends who don’t put themselves publicly on the line. I’ll admit to you, Steve, I spend a lot of time wishing I were them. Failure’s not in their vocabulary. It’s like they have a failure flu shot every year and I’m sick with failure all the time.

I never met you, Steve, and now I never will. Although I love my consumer electronics, that’s not your legacy for me. Instead, you inspire me to pick myself up every single time I fail … which, as you know firsthand, happens to those of us who create things more than we would like.

Maybe your failures are not how you want to be remembered and somewhere you’re hitting delete right about now and re-reading the article on Mashable about the iPad or on Forbes about your indelible legacy. I wouldn’t blame you. But something tells me that as an entrepreneur, innovator, and inventor you’re not doing that. Something tells me that you’ll file this on your super-Mac in the sky and will, in a new role, help the generation of entrepreneurs you so inspired push through failure so one or two of us can, like you, someday change the world.