Everything About Our Favorite Planet

The Earth and Cool Globes 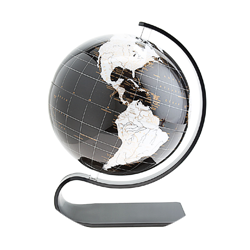 Long before there was Google Earth there were those things called globes.

Remember globes? We had them in our parents' libraries as kids and spent hours rotating them around and looking at faraway little dots like the North Pole, Moscow, and Melbourne, wondering if someday we’d go there. We’d close our eyes and imagine what could possibly be going on in those little dots at that very moment. Maybe Polar Bears were roaming their earth, perhaps people were filing through the Kremlin in awe. In the case of Melbourne, we imagined a place full of blonde girls who never went to school because it seemed to always be summer in Australia.

Now the Earth is different. Google lets us hone in on Earth’s every crevice, revealing all her secrets. There’s little left to our imagination anymore. Cities are no longer dots written in beautiful archaic fonts. They’re real life things you can look at on your computer screen. In fact, the Earth doesn’t even seem round; it’s as flat as your MacBook Pro.

We had forgotten about those little things called globes until we were in Barneys the other day. We stumbled upon Spherical Concept Globes and found ourselves transported back to that time when the Earth wasn’t at our fingertips, when you could still dream of unknown places full of castles and fairy princes, places where there was always snow or always sun, places someday you’d get to or someday not.

So, even though it probably seems totally old-fashioned and non-tech, our Bungalux advice to you today would be to do the passé thing and acquire a globe for your library or study. Whether you get the modern one from Barneys or an antique off of eBay, place one beside you as you work or read and start dreaming again.

To go with our “Earth” theme today, we’ve scoured a few of our favorite science sites to come up with some pretty darn amazing facts about our most magical and fantastic planet.

So, take a look below and once again be "wowed" by the planet Earth.