The Scent of Him 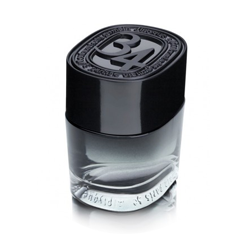 It happened six months ago, on a cold, foggy Saturday.

I had just been accepted to Wharton Business School, and I had flown in for my orientation. My flight had been delayed due to the fog, the hotel didn’t have my room ready, there were no cabs. So I found myself running to class. I’m Type A. I’ve never been a minute late in my life, and I couldn’t conceive of being late for my first day at Wharton.

I was almost at school when I stopped dead in my tracks.

He had disappeared months earlier. Most days I was able to stifle him; just as taking Vitamin C at the start of a sniffle can sometimes combat a cold, so work for me stopped “him.” I didn’t think of him as real anymore; instead, he was the hazy, ghost-like memory of someone who had once been real.

I was at Web 2.0 last week, playing hooky for a few hours, and I ducked down Maiden Lane, my favorite street in San Francisco. I found myself once again entranced by smell, this time in Diptyque.

When I asked what intense scent could draw me from a warm, sunny street into this cave-like boutique, the salesperson explained that in honor of Diptyque’s 50th Anniversary, Diptyque had collaborated with a few of their favorite parfumers to create Les Invites du 34. I’m not one who typically ogles over scents, but these limited edition offerings are truly wonderful. The Curiosities Scented Candle (with a cool etching of Pan, Diptyque’s original logo), Eau Mage, and Eau Particuliere Body & Home Spray have deep, rich, woody, ashy, masculine scents.

It’s three days later now. I have a few articles – a few are turning into “a bunch” – that I will probably never publish, as they’re too personal. And this was one of them. But now, as I reread it, I’m thinking tomorrow I’ll go ahead and hit “Send to all subscribers.”

If I do send it, I don’t want to leave it open-ended. So, I’ll finish it. As I make my final edits my new Diptyque candle burns beside me, and I love the scent even more than I did last week when I bought it. It’s a beautiful night in Palo Alto. I just came from a walk down University Avenue alone, where I went to Oren’s and had a pita by myself. But I catch myself before I grow wistful about it and wish for the scent of the past.

Instead I wonder who "he" will be. As I sit on my windowsill looking down at the Valley, I wonder if one of the little flickering lights I see is his. I wonder what he’ll look like, if I’ve met him already, if he’ll be taller than I am or have a nice laugh, if he’ll be good in the sciences or have blue eyes. I wonder what he’s doing this second. Perhaps a few hours ago he was walking down University Avenue alone too; maybe we passed each other, each smelling a sweet scent but not knowing whom it belonged to.