Cocteau, Ponti, and Man Ray ... On Your Table 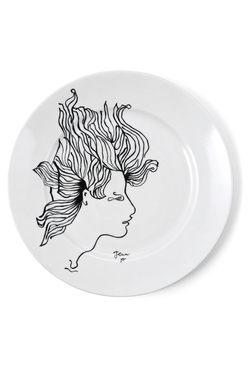 Every season we at Bungalux obsess over a few “have to buy, really must get it” items.

This spring it was that Celine dress cut-down-to-there (imagine what could follow!), those six-inch Louboutin shoes (make us almost eye-to-eye with those tall guys we crush on), and now ...
Les Assiettes des Artistes.

Can you imagine a phrase more beautiful? That French (which we haven't used since that summer of constant discoing in St. Tropez) is what Christofle uses to describe its Limited Edition set of five artist plates. Between 1942 and 1969 Jean Cocteau, Victor Vasarely, Paul Eluard, Man Ray, and Gio Ponti were each asked to design a special plate for the tony French silver, crystal, and porcelain manufacturer. The result was seldom available for purchase.

Now a lucky one hundred of you can buy a set of plates for $1600 at your local Christofle store. Sure, $1600 may seem expensive for five plates, but we actually think it's a steal for collectible pieces of art from some of last century's most notable figures.

That being said, unless you were one of the few who shorted the housing market a few years back, it may be decadent to eat on the plates; after all, you wouldn't want to expose them to sharp tools like forks and knives. So, we say hang them in your kitchen or dining area. All are black and white except for Man Ray's bright "Merci." Put the Man Ray in the middle of the other four and your kitchen goes from ordinary to Bungalux.

And while we're on the subject of merci: "Merci, Christofle," for giving us the opportunity to bring these icons home.