Don't Forget About the Offense 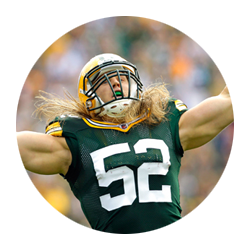 I’m a Packers (10-0) fan. Two weeks ago I was watching football with my best friend who’s an Eagles (3-6 after Week Ten) fan. She was rightfully complaining about the disappointing year the Eagles have had and I said, “You’re telling me. Our defense is so terrible they must have missed the, ‘There’s no strike, we’re playing football this season memo.’”

My friend looked me straight in the eye and declared, “Yeah, it sucks to be a Packers fan this year, babe.”

I’m a fan of the best team in football, our quarterback is having a record season, we won last year’s Super Bowl and the only real question mark for this regular season is whether we’ll be undefeated or not.

But then why am I focused on our defense? Why am I answering questions on Quora about why we WON’T be undefeated? Why am I cursing our defensive line during 45-7 routs?

The answer’s simple: As adults we’ve lost the ability to be grateful.

As children we were thankful for a new Madonna video, a day off school, a vacation, a sleep-over, a birthday party, a trip to the mall for a Nancy Drew book, our Christmas pageant, the smell of Thanksgiving turkey and a Christmas tree, no homework over a long weekend, an “A” on our lab experiment in science.

Would any of those things really excite us anymore? Speaking of experiments, run one: Go back to your grade school the day of their holiday party and look at what you were so excited about. How grateful would you be for a few Christmas cookies, “Hark the Herald Angels Sing” in the CD player, and an hour off of class now? Would it be the source of real, genuine thanks?

In my case, probably not.

Jack Dorsey or Chris Sacca as an investor would thrill me, so would favorable coverage from TechCrunch, or if that cute Internet founder I met last month at a conference would email me back (maybe it hit a firewall, I keep telling myself … maybe he never got it). But none of those things is likely to happen, so then what?

Then I go day-after-day not being grateful. Those little things that would have meant so much to me as a child are forgotten in favor of other, huger things. I probably won’t get these things, so I end up perpetually ungrateful for what I do have.

So this Thanksgiving week, I encourage you to think about the hundreds, if not thousands, of things you should be thankful for. We’d love it if you sent some of them over to editorial@bungalux.com. We’ll post some on the site, so let us know if we can use your name or if you’d prefer to be anonymous.

Thank you to my three best friends who try to convince me multiple times a day that I’m a superstar (even though I’m not) and that Bungalux will conquer the world. Thanks to my family and my Intelligentsia friends who tell me I need to do better and they’re right. Thank you to every artist who creates something that enriches my life: That’s you Jay-Z, David Cronenberg, Tom Ford, and everyone in between. I’m thankful for my backhand, my height, my health, my blue eyes, and my ability to reach thousands of people with my writing. An enormous “I’m touched” thank you to our fans who click, post, tweet, share, and read. And wow, thanks, and love to the superhuman Tara, Mike, and Dana at Cuban Council: You are as much a part of Bungalux as I am.

Oh, and Packers ... I’ll forgive the defense because your offense is so darn good.