A Conversation with Scott Mitchell 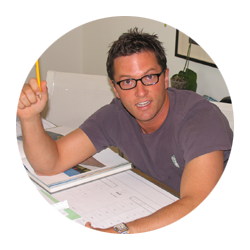 In an age of "celebrity" everything, I think it's pretty cool when you meet someone who tries to be under the radar.

It may or not be working in the case of the fabulous designer, architect, and landscape designer extraordinare SCOTT MITCHELL. Despite his every effort to the contrary, Scott's prodigious talent is putting him on everyone's radar and design A-lists. Scott's clients range from ... well, people you've heard of, but we don't mention here because neither does Scott. Suffice it to say some of the world's greatest tastemakers have brought Scott in to make their homes perfect.

Scott's resume is one of the most impressive around. Before starting Scott Mitchell Studio in 1999, Scott worked at Stephen Miller Siegel & Associates and with Preston T. Phillips, a former protégé of architect Paul Rudolph. Following his time in New York, Scott completed an internship in Norman Foster’s London office, and then moved back to the US to continue his studies at the Southern California Institute of Architecture (SCI-Arc). Under the mentorship of architects Richard Meier and the late Charles Gwathmey, Scott has spent the past 20 years developing his practice.

I've been fortunate enough to get a peek at some of Scott's incredible projects. I'm most struck by his use of rich materials, light, texture and, in the cases of new construction, siting. Yet most interesting to me is that every one of Scott's projects speaks directly about the client more than the designer. That is a true talent.

I caught up with Scott last week at one of his incredible projects - an incredible seven year-in-the-making compound on six acres overlooking the ocean in Malibu. Over lunch at the Malibu Country Mart Scott chatted design, his own house (which I've been to ... I assure you he's being way too modest in its description), and simplicity.

Please click on the link below or above right to read my full conversation with Scott.